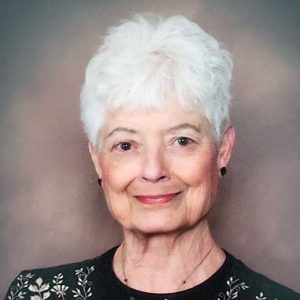 Jacky was born in Ste. Geneviève, MO, January 30, 1936, fifth of nine children of Cornelius (Kernet) and Thresa Roth. She graduated from Valle Catholic High School in Ste. Genevieve in 1953 and attended St. Mary’s Nursing School in Kansas City, MO, where she graduated in 1961 as the top student in her class.

While studying at St. Mary’s, a blind date led to her 53-year marriage to Robert D. Kussman. They were married at St. Joseph’s Catholic Church in Zell, MO on October 14, 1961. Their union produced 7 loving children, 16 grandchildren and a great granddaughter. Jacky has spent most of her married life in Chariton County, while remaining closely linked with family and friends in her beloved Ste. Genevieve.

Jacky was a caring and present mother and wife. A prolific cook, she fed many mouths around her large kitchen table. She passed on her values ​​of hard work, perseverance and service and fostered independence in her children from an early age. Her faith was unwavering as a staunch servant of the Catholic faith, and she was a long-time church organist. She was known for her calm smile and gracious demeanor, kind heart and generous nature.

Creative and artistic, Jacky has expressed herself through her love of music, painting, gardening and reading. She was known for her magical green thumb and spent joyful hours working under the hot summer sun amidst her magnificent flowers, the ultimate bright and magnificent expression of her talents.

A registered nurse for over 50 years, Jacky has worked at North Kansas City Hospital, Chariton County Health Department and Brunswick Nursing Home. Throughout her nursing career, Jacky was known to treat people of all ages with extraordinary compassion, kindness and respect.

Jacky’s funeral mass is scheduled for 10 a.m. on Saturday July 3, 2021 at St. Boniface Catholic Church in Brunswick, MO. All are invited to attend the lunch following his mass. In lieu of flowers, memorial contributions can be made to the Catholic Cemetery in St. Boniface, Brunswick, MO or to the Sisters of St. Francis, Savannah, MO and sent to The Kussmans, 302 Rue W. Harrison, Brunswick, MO 65236.