There are few TV personalities more legendary than Oprah Winfrey. Her longtime talk show, “The Oprah Winfrey Show,” ran for 25 years, but she chose to step away to focus on other creative endeavors. During that time, she won two Primetime Emmy Awards (via IMDb). It was no surprise to see Oprah presenting the award for Best Actor in a Limited or Anthology Series or Movie at this year’s Emmys, which Michael Keaton won. Of course, fans couldn’t get enough of her outfit, whether their opinions were positive or negative.

Oprah was seen wearing an all-white trench coat ensemble. Her outfit was gorgeous, but fans had some thoughts about her hair, which was in a long side braid. Fans on Twitter had a lot to say. A viewer wrote, “Oprah looks like the angel who checks you in at heaven’s door.” Another one intervened“Oprah is gorgeous. Stunning in white!” 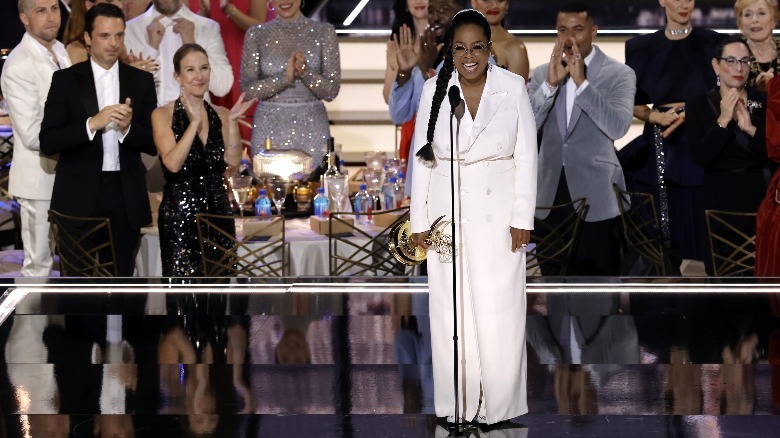 It seems most fans agreed that Oprah’s outfit was awesome, but some weren’t buying her hair. A fan wrote, “Whoever’s in charge of Aunt Oprah’s pony has to go because you could have tried harder.” Her hairstyle was giving Kim Kardashian vibes to some, leaving them wishing the look was polished in a different way.

Oprah’s moment at the 2022 Emmys was short-lived, but the conversation about her fashion choices continued.